Just get it right!!! A rant about fiber in the media

As an adherent of the practice of traditional fiber arts, I notice when books, TV or movies represent those practices. Sometimes it’s embarrassing - I cringed during the Mists of Avalon mini-series scene depicting spinning as the actress pedals at top speed hunched over a castle wheel, clutching finished yarn at the orifice, letting it take up on the bobbin and then yanking back on it.  No drafting, no fiber, just have her pedal the hell out of a modern wheel and call it spinning. 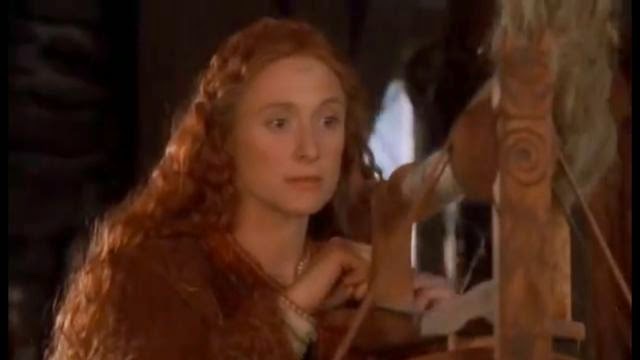 Just a few weeks ago, I watched a favorite tv series character refer to “fine Scottish cotton” and was stopped in my tracks. The time period was early 1700s, and it mainly grew in America and India at the time, so that reference was baffling. Wool was the main fiber in Scotland then, not cotton, and it was actually against the law to manufacture cotton fabric in Britain, to protect the wool industry.  If it was made in Scotland during that time, it was made from wool.

A book titled “Weavers” that I picked up to read, a fantasy, but based in a medieval village setting was so poorly researched that I had to complain on Amazon. The author had the titular heroine winding balls of yarn as her cottage industry. Not spinning, not weaving, no explanation of where the yarn came from, no description of loom or wheel or any other equipment. Amazingly, the author was defended by some of her readers on the Amazon page, who told me to get down off my soapbox. Their explanation was that Weaver was her last name, not her activity; they obviously are ignorant of where last names came from in that era, and since this is a Young Adult love story, those historical facts don’t seem to matter to them.

And that’s my beef with shoddy research - these young people are growing up with no idea of how cloth is made, and the media could care less about sharing all the fascinating details of historical fiber. Wars have been fought, empires built and laws enacted over fibers, fabrics and dyes, and yet so few remember. And there are tens of thousands of traditional fiber practitioners - millions if you include the craftsmen in the third world still practicing their cultural fiber crafts - who participate in making cloth from scratch.  It’s not an extinct practice, museum-bound and misunderstood. It’s a living craft, looking forwards AND backwards, filled with magic and skill. I find it tragic that the fiber arts are so poorly understood and are nearly forgotten. That was my main impetus in opening the shop and gallery, to educate, to advocate for the fiber arts. If I could keep that knowledge alive, one person at a time, that was worth the effort. Now that the shop is closed, it’s a little harder. So instead, I complain.

The most recent thorn in my side is an episode of Outlander, a historical novel turned into a cable series on Starz. The books themselves are meticulously researched - I have found few errors in them, and none in the area of the fiber arts - but the tv series is another matter. Firstly, the costuming is decently authentic in most ways, but the women in the series are wearing bulky knitted shrugs, wristlets and scarves, not period at all. Bulky yarn is a modern creation, and knitting during that time was mainly for socks and stockings, and not for decorative and not very warm wraps. 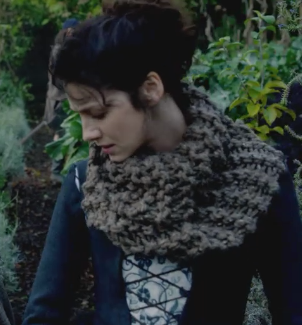 But the real kicker was the Outlander episode that included a waulking scene where a group of village women are waulking wool cloth. More or less accurate to start, including chants, urine and a length of wool tartan. I was thrilled since waulking is a large part of what I do as a felter. AND THEN, the woman tells Claire that the urine is for setting the dyes. NOT TRUE! and what a loss of an opportunity to tell a story. Urine and the pounding is for fulling the cloth, that is, making the cloth hard and dense so that the plaid is weatherproof and warm, even in the wet cold Scots weather. That process allows it to be the go-to piece of clothing for Scots outlaws and clansmen traveling rough through the Highlands. Also, if the dyes weren’t set yet, the colors would run and blend in the waulking, and the clan pattern would be lost entirely, even the muted hunting plaids in the show. Vegetable dyes are set in the dyeing process as well, not in a later process. Just not accurate at all, and they could have Googled waulking and gotten more accurate information.

Shoddy. Just shoddy. All I could think was that they asked a museum docent and not a practicing weaver or felter. Of which they have thousands in Scotland where the show is produced.

You can tell that I take all of these transgressions personally. And all of us should. I’d be willing to bet that many of you have noticed similar mistakes, and cringed. We should complain, and regularly. I have half-kiddingly suggested that we stage flash-mobs at gyms that offer “Spinning” classes, to demonstrate the real spinning process, the one that pre-dates the stationary bicycle. Why they thought we were done with the term so they could appropriate it, I don’t know.

So I do think we should complain, and often.* Fiber practices are nearly invisible in our culture, other than knitting and quilting, and so many knitters and quilters themselves are ignorant of the depth of the craft they practice.  If we want the fiber arts to continue in this new millennium, it’s up to us to forge that visibility. And keep the media aware that we are keeping an eye on them.

PS: You can check out this website, Frockflicks.com that comments on period authenticity, from a historian's standpoint, if not a fiber artist's. It's a bit snarky, and fun.


* UPDATE And, we should acknowledge authors and media that get it right. I just emailed an author who described in thrilling accuracy the process of spinning linen. She interviewed a farmer/spinner and watched YouTube videos to get the terms and process correct. I got a wonderful note back from her, and I hope that she will take up spinning because of her interest. This is only a benefit to all of us, to encourage and teach. The book is Entreat Me, by Grace Draven. Thanks, Grace!!!
Posted by Nice Threads Fiber Gallery/Studio at 11:30 AM No comments: